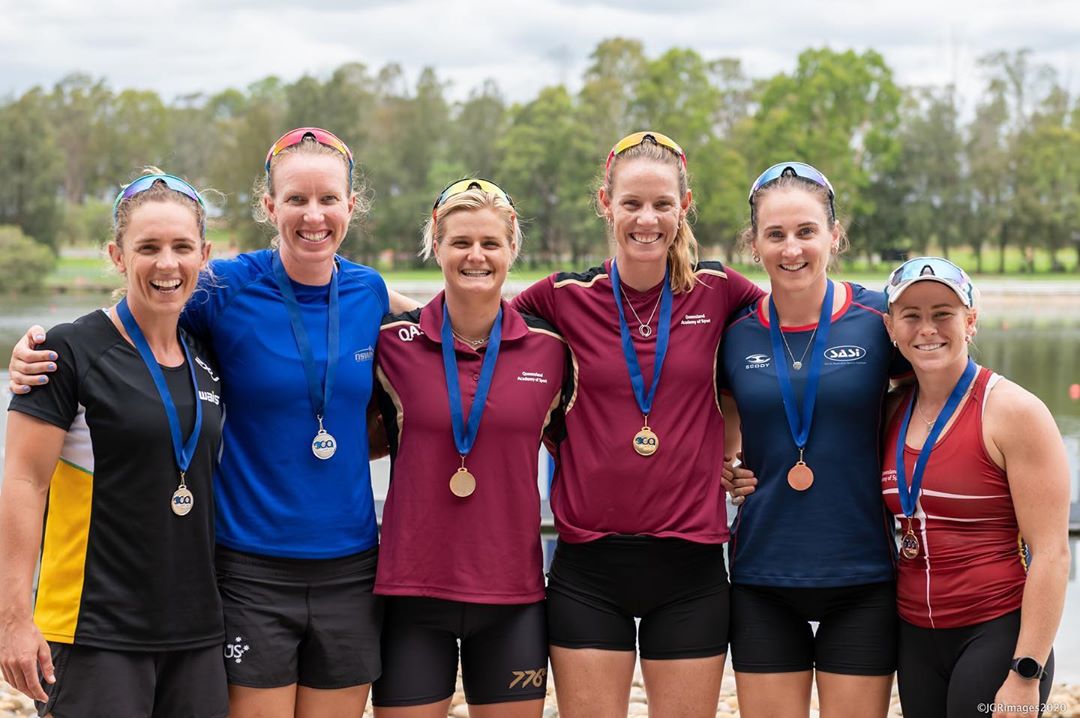 With the event doubling up as the Oceania Olympic Continental Qualifier as well as the first round of national team selection trials for Olympic and U23 team selections, a lot was at stake at the three-day event at Sydney International Regatta Centre.

With the maximum canoe sprint quotas locked away, all attention on Saturday and Sunday turned to the relevant selection racing with the event the first of two events counting towards Olympic and U23 national team selection and with names on seats yet to be decided and international standard times to be met.

Rio Olympians Alyce Wood (nee Burnett) and Alyssa Bull (QLD) made the most of their opportunity to set an early mark taking home the win in the women’s K2 500 on Saturday and following up with a first and second place in the women’s K1 500 on Sunday respectively. Wood also added a second-place behind British triple Olympian Jessica Walker in the women’s K1 200 to a round out a successful regatta.

The Sunshine Coasters were thrilled to be back in the women’s K2, the boat class they raced in at the Rio 2016 Olympics.

“We absolutely love the K2, it’s been great to be able to focus on that again this year and it is like going home again.

"Just the feeling of the K2 going well, nothing beats it. The nerves were high, that’s for sure and the pressure coming into this weekend was a lot different to what we are used to. Everyone is targeting us but it is really nice to get out there and have a nice race,” Alyce Wood said.

London Olympian Jo Brigden-Jones (NSW) also wrapped up a strong start to selections with a third place in the women’s K1 500 on Sunday, after finishing second in the women’s K2 500 together with Jaime Roberts (WA) on Saturday.

“It’s been a good regatta and our two main selection races (women’s K2 and K1 500) went pretty well. Jaime and I have spent more time together in the boat this year with Jaime spending a fair bit of time in Sydney and training with me in Narrabeen and it’s been nice to work on a boat a bit more and it has become a bit more consistent,” Brigden-Jones said about her partnership with Roberts.

“We will go back training now and be back for nationals in a few weeks’ time. A lot of the weighting for selections is on nationals, so the K1 race there will be a hot one, which is exciting. And by the time we recover from this event, I’m sure time will go pretty quickly and we’ll be gearing up for nationals already. Bring it on” Jo Brigden-Jones added.

Australia’s women’s kayakers provisionally secured the maximum Olympic quota of six spots at the Oceania Continental Qualifier with South Australian Cat McArthur and Queenslander Brianna Massie securing Australia the final two quota spots in the K2 500 Oceania qualifier race on Friday. They backed up a strong regatta with a third place in the women’s K2 500 final on Saturday.

“A big shout out to Cat and Bri (Brianna) getting an extra two spots for the team. It’s going to be very exciting to be able to send six girls to the Games comes Tokyo time,” Alyssa Bull said giving credit to her teammates.

This is the first time since London 2012 that Australia’s women’s kayakers have secured the maximum quota after Alyce Wood, Alyssa Bull, Jo Brigden-Jones and Jaime Roberts already secured the first four quotas in the K4 500 at last year’s world championships.

“Before Rio, we missed qualifying the K4 so in 2016 we had to qualify the K2 which is what Bully and I did and we had to qualify the K1 as well. So, it’s so different this year having a full quota now. This was the first round of selection so the wins don’t really mean a lot unless we back it up again at nationals but you got to put your best foot forward and we had some good races,” Alyce Wood explained.

While Brigden-Jones, Wood and Bull are aiming for their second Olympic Games, Queensland’s Tom Green and Jean van der Westhuyzen are the youngsters and new kids on the block when it comes to Olympic selection.

Green, who took home a double world champion title last year in the U23 men’s K1 1000 as well as the U23 men’s K4 500 last year, and made A finals at the Senior World Championships, also won all his heats and semi-finals in these events.

He kicked off a successful weekend securing early U23 selection in the men’s K2 1000 together with Jean van der Westhuyzen on Thursday with the duo wrapping up the event with an impressive win in the Open K2 1000 on Sunday.

“We went out a bit harder than usual and followed Muzz and Lachie right next to us and just tried to push and keep it nice and consistent in the middle and drive a strong finish and luckily we were able to do that. We are both pretty buggered but really stoked with it,” Jean van der Westhuyzen said about the race that saw them win in an impressive time of 3:12.27 and 1.74 seconds ahead of London Olympic Champion Murray Stewart (NSW) and Rio Olympic medallist Lachlan Tame (NSW).

Green and van der Westhuyzen are only a young and new combination, who have only paddled the K2 together since December and with Westhuyzen also coming second in both the men’s K1 1000 and 500 they will be the ones to watch going into the final round of selections in March.

“It all started out at GP1 in December and we kind of did it for a bit of fun but when NSW State Champs came around we had a pretty good race and thought we might have a good chance here, so we just kept training as per usual and it’s slowly getting better and better,” Green said about their new combination.

“We will have a solid block of training between now and nationals and keep listening to the coaches and the advice they can give us to keep improving and hopefully come out at nationals and have another good, fun race with the boys,” van der Westhuyzen added about the next steps ahead.

Tokyo 2020 would be the first Olympic Games for the two 20 year-olds and even though they still have another major hurdle to jump, aiming for Tokyo is what drives them.

“It’s always been a drive for me and Jean as well and it’s been good to be able to share this not only with Jean but also with the rest of our team back on the Gold Coast. It’s more of a family than a team I guess and there’s always a bit of rivalry,” Green added about racing his training mates for Olympic selection.

Jordan Wood finished third behind Green and van der Westhuyzen in the men’s K1 1000 and K1 500 and teamed up with Riley Fitzsimmons, Lachlan Tame and Murray Stewart to win the men’s K4 500.

In other Olympic quota spot news over the weekend, South Australian Sport Institute’s canoeists Bernadette Wallace and Josephine Bulmer wrote sporting history on Friday, securing the first ever women’s canoe quota for Australia, with women’s canoeing to premier on the Olympic Program at Tokyo 2020, but will still have to meet the international performance standards at nationals to be nominated to the team.

In the men’s canoeing, Queensland’s Benjamin Manning secured Australia the Olympic quota on Friday and backed it up with a win in the C1 1000 final on Saturday and in the C1 500 on Sunday.