Back-to-back podiums for Peel and Anthony 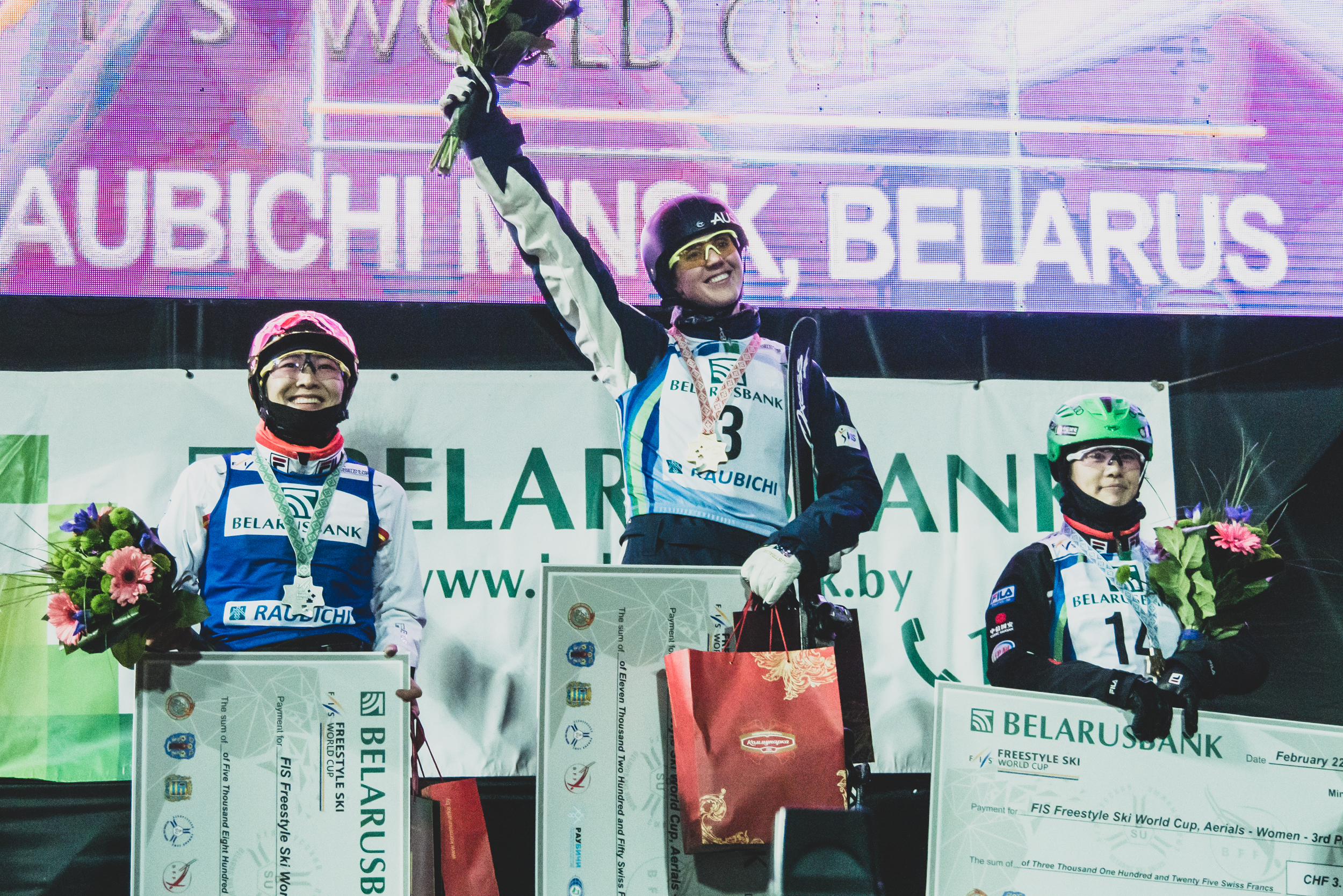 Improving upon her silver finish in Moscow last week, aerial skier Laura Peel has claimed gold in Belarus, her third podium appearance for the season.

The 2015 World Champion from Canberra achieved the highest jump score of her career to win gold, scoring a huge 106.53 points with her full-tuck-full, double twisting, triple backflip somersault.

Rounding out the podium was Mengtao Xu of China, and her teammate Sicun Xu in third.

“It’s an amazing feeling”, an excited Peel commented after the event.

Laura Peel @the_snowgi claims the GOLD 🏅🇦🇺 in the @fisfreestyle World Cup aerials in Minsk Belarus. Her full-tuck-full scored a 106.53 in the final, a new PB for Laura. Awesome result!! 🇦🇺🏅🦘💪

“I’ve definitely been wanting to crack the 100 point mark for a while, I came pretty close last week but to put down my best jumps when it matters is awesome, all the hard work is coming together.

Following the victory, Peel has now moved up into second place on the FIS World Cup standings with two events remaining in the season and is on 319 points, just 6 points behind World Cup leader Mengtao Xu of China.

Over in Japan, the silverware kept coming for the Aussies, with Jakara Anthony claiming moguls bronze, her second consecutive podium for the season.

The 21-year-old from Barwon Heads in Victoria was consistent all day, placing second in qualifications and also in the first round of finals with a score of 80.82 points.

That smile tells a story! @jakara_anthony claims back to back podiums with a bronze medal in Tazawako Japan today! Awsome result Jak! 💪🇦🇺🥉

In the top six super final, Anthony finished in the bronze medal position with a score of 79.01,  3.02 points behind the event winner and current world number one, Perrine Laffont of France who scored 82.03 points, with Junko Hoshino of Japan in second with a score of 79.75.

“It was a great day for me, not weather-wise but I was really happy with how my skiing went," Anthony said.

"In training, I was making some progress and that showed in my competition runs.

“There are always challenges in every course, I had a mistake in my qualification run, but it’s about remembering that and making the adjustments that you need to," she continued.

“The goal for me is more about the quality of my skiing, and not so much the end result, I just want to be putting down runs that I know are technically at my best and that’s the major goal for me.

“There are still five more World Cup starts for me this season, so going from here it’s just about taking every opportunity I can to improve on my skiing.”

This result is Anthony’s seventh World Cup medal of her career (1 gold, 4 silver and 2 bronze), and continues her great form in the past 12 months which also included silver at the 2019 World Championships.

After eight events so far on the FIS World Cup tour, Anthony is currently ranked second in the world, with Graham in fourth place.