Brigden-Jones takes first step on road back to Australian team 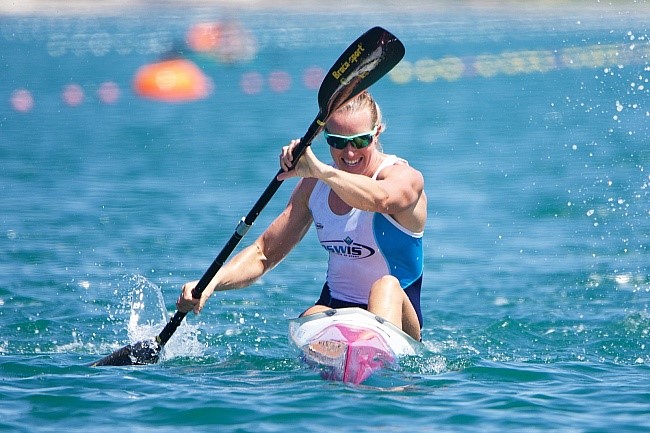 Article Introduction
Sprint canoeist Jo Brigden-Jones has underlined her determination to earn her place back on the Australian team with a strong performance in the K1 200 at the National titles in Penrith.
Content

CANOE - SPRINT: Sprint canoeist Jo Brigden-Jones has underlined her determination to earn her place back on the Australian team with a strong performance in the K1 200 at the National titles in Penrith.

The Sydney paddler finished just 0:01 seconds ahead of Rio Olympian Alyce Burnett in a thrilling final, with Burnett’s K2 500 partner, Alyssa Bull, the third Australian to cross the line.

The race was won by 2012 Chinese Olympian, Yanan Wu.

In other events, Murray Stewart added the K1 500 title to the K1 1000 gold he won 24 hours earlier, Joel McKitterick and Bill Bain won the K2 500, and there were wins for Curtis McGrath, Amanda Reynolds and Susan Seipel in Paracanoe events.

Brigden-Jones, who made her Olympic debut in London in 2012, was last year involved in an intense qualification struggle for the final Australian K1 position on the Olympic team, losing a race-off against her K2 partner, Naomi Flood, in Europe.

“I remember getting off the water at World Cups and I thought that would be the last time I wore the green and gold for Australia. I was pretty disappointed in my performance.

“It did cross my mind a few times that I should give it in, and I think most people expected I would retire. But I came back to paddling because I enjoyed it, and that’s why I’m still paddling.”

Brigden-Jones is hoping to get named later this week in the Australian team to compete at this year’s World Cups and World Championships.

Another hoping to be named in the Australian squad is Queensland’s Bill Bain, who also narrowly missed out on going to Rio last year.

He has this week finished second behind Stewart in the K1 500, won the K2 500 with McKitterick, and was a member of the winning K4 1000 team alongside Stewart, Riley Fitzsimmons and Jordan Wood.

“Coming off last year I guess I was a bit tired, for one, and the other boys put in some really hard work on the Gold Coast and I don’t think I was willing to do it,” Bain said.

“I was a bit scared and got the results I probably deserved out there. I did the best thing for myself, concentrated on my Uni and went on a couple of little holidays and did things I like doing like fishing and surfing.

“You can’t do it half-hearted, but I’m pretty focussed at the moment. I want to finish Uni, but then I’ll be doing a lot of kayaking. You always have a good mindset when you are having good results.”

Susan Seipel picked up the National V1 Paracanoe title, adding to the bronze she won at last year’s Paralympics.

“I think it’s been nice to have a little break, but having such great results at that level spurs you on,” Seipel said.

“I’ve had a long road to the Paralympics, trying with equestrian in 2008 and not making it, and Paracanoe has given me the chance to fulfil my dream of representing Australia at the Paralympics.”