Georgia Godwin: The highs and lows towards Tokyo 2020 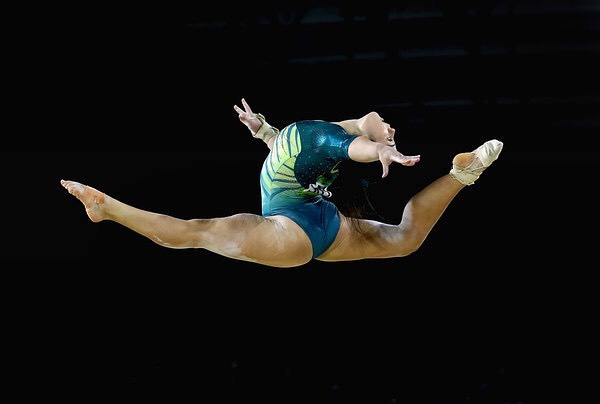 At just 10 years old, Georgia Godwin set her sights on competing for Australia at the Olympic Games. This year she hopes to turn those dreams into a reality, gunning to represent the country as Australia’s sole female gymnast in the individual all-around event at Tokyo 2020.

Coming off a successful silver medal performance at the recent Melbourne Gymnastics World Cup, Godwin has further proven why she is a strong shot at success if she is selected for Tokyo 2020.

Her gymnastics journey began at the age of three when her parents enrolled her into the local PCYC in the hope that it would exhaust some of her endless energy supply, little did they know that this would be the first step towards a long and highly competitive career in the sport.

Growing up training at the Moreton Bay College gymnastics facility, Godwin’s family spent a number of years living separately in order to accommodate her extensive training schedule. While Godwin and her mother lived in Brisbane, her brother and father stayed at home on the Gold Coast.

Another throwback to 2007! Vault was my favourite apparatus to train when I was 10 years old. However times have changed and now we have a love/hate/it’s complicated relationship 😂😬

“It was hard. Every Saturday after training mum and I would pack up the car and drive back to the Gold Coast for the weekend. Then, on Sunday night we would pack up again and head back to Brisbane ready for training on the Monday morning,” Godwin explained.

“I loved having my dad and brother around, but those are some of the sacrifices you have to make.”

All those sacrifices became worthwhile, now that the 22-year-old has provisionally qualified her spot on the Australian Team for the Tokyo 2020 Olympic Games.

If she is to make her Olympic debut in Tokyo, Godwin will compete in the women’s gymnastics all-around event.

The all-around event is an individual competition, where the gymnasts compete on all four apparatus; bars, beam, vault and floor. The scores from each apparatus are then combined to form the gymnast's total score.

Thanks for hosting another amazing World Cup Melbourne!!! Got some things to work on before I leave for America (with Benji the koala 🐨) in a weeks time but overall I’m happy with how my first comp of 2020 went! 🙌🎉😍 #bringonUSA #TA

While it is already an incredible achievement for any athlete to qualify for an Olympic Games it is especially meaningful for Godwin due to her unique family background.

“My mum’s side of the family is Japanese, so to have my first Olympics in Tokyo would be the cherry on top of the cake. I couldn’t have asked for more!” she said.

One family member she is particularly excited to compete in front of is her 93-year-old grandfather who lives in Japan, who she hasn’t seen in four years.

“He has been there for me since day one and he is just so full of wisdom. He has such a soothing presence and whenever I am falling apart, I just talk to him and he makes it better,” Godwin shared.

“He tells me to just keep going, one foot in front of the other, and just to go at my own pace.”

🌟All good things must come to an end🌟 What an amazing experience the Games have been. I’ve had my ups and downs but I’m so grateful I have an amazing support network around me and persisted because I can now call myself a triple Comm Games medalist. 🥈🥉🥉✌️🤟

Throughout her gymnastics career, Godwin has experienced her fair share of heartbreak. After narrowly missing out on the 2016 Rio Olympics due to ongoing injuries, the Queenslander considered retiring from the sport.

“Getting so close to making the Olympic team, and then missing out was really hard. I had been training for about 15 years by that point, I thought I was done, there was nothing left in me.”

Godwin sat down with her two coaches to discuss her retirement but ultimately came to the decision to take two weeks off before making her final call.

“After just one week off, I was ready to get back in the gym. I had a new fire in my belly and I was ready to go. I just needed a bit of a break to reset my mind and body.”

Two years later Godwin qualified and competed for Australia at the Gold Coast Commonwealth Games where she claimed silver in the individual all-around event, and bronze in the uneven bars and team event.

While the Commonwealth Games was one of Godwin’s most successful events to date, she gives credit to both her successes and failures in helping her develop into the competitive athlete she is today.

👶2008 to 2018👵 It’s nice looking back at old photos to see how far I’ve come! 🎉 In the last 10 years I’ve grow a little bit taller, have a few new skills under my belt and a few more medals hanging on my wall. But my love for this sport hasn’t changed ❤️. I’ve definitely had the days where I’ve wanted to just give up because it’s too hard, too hot/cold or it all gets too overwhelming. But deep down the love, the dream and the people backing me have always helped me push through those tough times. Thank you to everyone who has stuck by my side, you know who you are 💕. And to those who said I couldn’t do it, look at me now 😎👻✌️ #grateful

“I have had many good campaigns, but I have also had quite a few unsuccessful campaigns that have helped shaped me into the gymnast I am today.

“The skills you develop over the years being an athlete, how to calm your nerves and keep focused, you can’t learn those things in a training environment, you can only get them from competition experience and the more you do the better you get at it.”

At the same qualifying event where Godwin claimed her individual Olympic spot, Australia was also hoping to qualify for the women’s team event, however, unfortunately, missed out by just one point.

“When I found out I had qualified individually, we also found out that the team had missed out by one spot.

“It was heartbreaking and hard to process that I wasn’t going with the team, but I was also very happy and excited to have qualified individually. It was a bittersweet moment, but the girls were so happy for me.” Godwin said.

Fortunately, with a few more qualifying opportunities coming up, Godwin is hoping to have a few more teammates join her in Tokyo.

“There is one more spot for an individual to qualify at the Continental Championships in April, and it is between Australia and New Zealand.

“One of our gymnasts is also the highest-ranked in beam, so if she can keep that ranking over the next three world cup events she should also qualify and hopefully I will have two more girls going with me.”

Regarding her own Olympic performance, Godwin has set herself some clear goals, however, she is most excited by the Olympic atmosphere.

“My main goal is just to go out there, do my best and enjoy the experience. I have waited my whole life for this experience, and I am just so excited”

As for some advice for young Australian gymnasts aspiring to go to the Olympic Games, Godwin says the small steps will be what gets them where they want to go.

“It won’t be easy but just keep chugging along and put one foot in front of the other. Believe in yourself, and you will get there”.