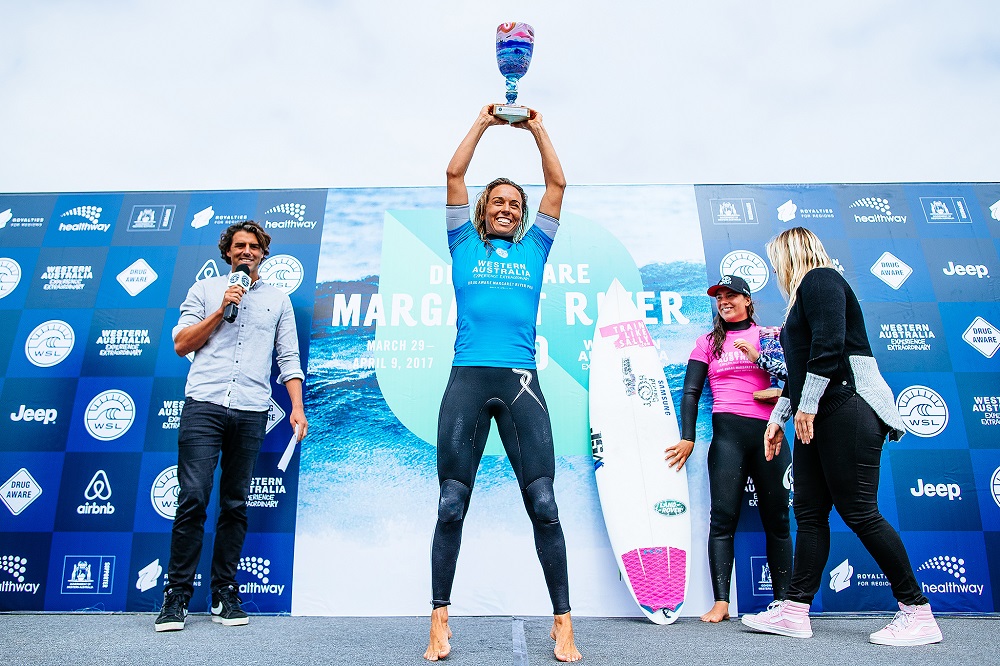 SURFING: Sally Fitzgibbons has won the Drug Aware Margaret River Pro after taking down 2016 WSL Champion, and fellow Aussie,Tyler Wright in the final.

Fitzgibbons’ success on the weekend now ties her for World No. 1 on the Jeep Leaderboard with six-time WSL Champion Stephanie Gilmore (AUS).

“I’m so over the moon to be holding this trophy,” Fitzgibbons said.

“When I heard my name being called out as the champion, I really felt a sense of belonging and calm. It’s been an amazing couple of weeks here in the West and to finish it off with a win is the best feeling.

"I love coming to Margaret River. I feel like it’s a place that I am super comfortable and familiar with, so it’s a special event win for me.”

The final saw the heated all-Australian battle unfold between Fitzgibbons and Wright at Main Break.

Fitzgibbons kicked off the final with an authoritative 7.83 on her opening ride. Wright fired back on multiple attempts, but was only able to lock in mid-range scores.

Fitzgibbons continued to better her position with a strong 7.07, forcing Wright to chase an excellent 8.30. On her last attempt, Wright was not able to challenge Fitzgibbons’ 14.90 combined score.

“The town of Gerroa is so small and it was well represented today in the final with Tyler [Wright] and myself, which is really cool,” continued Fitzgibbons.

“Holding equal first on the rankings is a special feeling for me. It’s a long year, so I just need to keep focused and keep to my goals and hopefully hold on to the top spot.”

In the mens' event 2016 WSL Champion Hawaiian John John Florence won the title over Kolohe Andino with a score of 19.03 to 13.60 respectively in the final.

Florence knocked out Australia's Jack Freestone in the first semi-final before the second semi between Andino and Brazil's Felipe Toledo was stopped after 15 minutes due to shark sightings.

Florence claimed the WSL No.1 ranking at the expense of Australian Owen Wright, who lost his quarter-final to Freestone.