Gilmore and Wright back on top of the surfing world 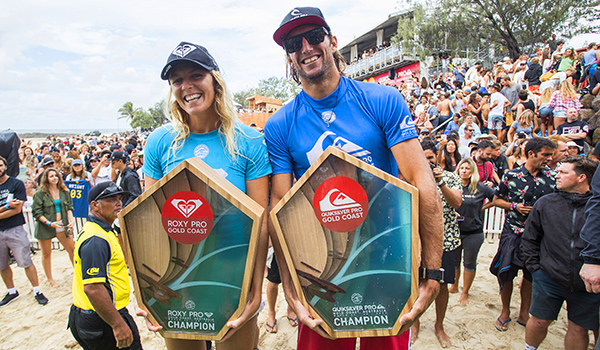 An incredible finals day delivered two Australian event champions, and both Wright and Gilmore will take the coveted Leaders’ Jersey heading into the next event on the CT, the Drug Aware Margaret River Pro.

Wright claimed his third CT victory today by defeating close friend and teammate Matt Wilkinson (AUS) in what was one of the most inspiring comebacks in surfing history.

Wright sat out the entire 2016 season due to a career-threatening, traumatic brain injury he suffered on Oahu’s North Shore in Hawaii in 2015 and the Quiksilver Pro marked his triumphant return to the Championship Tour after accepting the injury wildcard for 2017. The win is his best ever result on the Gold Coast and earns Wright the top spot on the Leaderboard.

“At the start of February, I was sitting in the doctor’s office and there were question marks on the year,” Wright said.'

“So to be sitting here right now, we just pushed hard and went hard. I confronted every fear of getting back into it.

"There were a lot of fears I needed to push through in order to get back into the sport and back into what pretty much took me out and could have taken me out forever. I kept going and kept doing it. I am just so stoked.

“I couldn’t have done it without all the support of my friends and family, including my partner and my little baby boy,” continued Wright.

The Quiksilver Pro final saw Wright take on Wilkinson in a thrilling battle of the goofy-footers. Both surfers went wave for wave, but it was Wright who claimed the win with an excellent 8.33 and 6.33 by showcasing his powerful backhand snaps. Wilkinson, with two 6-point rides, was not able to deliver the required scores to defend his event title.

“To be in another Final here is a dream,” said Wilkinson. “I obviously wanted to win but Owen [Wright] has made me cry about five times this week. To see him last year was one of the toughest things I’ve ever seen and for Owen to be in the this event is one of the most amazing things, but to go and win is incredible.

"I couldn’t have asked for a better person to beat me. He’s inspired me so much and to come back and do this is unreal."

Yesterday’s win marks Gilmore’s 25th elite tour victory and her first since the Cascais Women’s Pro in 2014. The result will move Gilmore up from 6th to 1st on the rankings.

“I can’t believe it, I’ve been visualizing holding that trophy so much,” Gilmore said.

“It was so hard against Lakey [Peterson]. I’m so happy to have all the support from everyone here and there’s nothing better than winning at home.”

Gilmore previously dispatched three-time WSL Champion Carissa Moore (HAW) in the Quarterfinals with a perfect 10-point ride and compatriot Sally Fitzgibbons (AUS) in the Semifinals. Moore, who came into the event ranked third in the world, will move to fifth. Fitzgibbons’ Semifinal berth will see her climb up five places to third on the Leaderboard.

“I haven’t had the yellow jersey for a while and it’s going to feel so good to put that on,” continued Gilmore.

“Getting to win an event again was really cool and it feels really rewarding to win. It’s so far from here but I’d love to win another World Title.