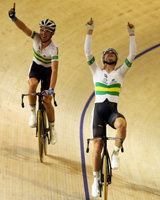 Two-time reigning madison world champions Leigh Howard and Cameron Meyer made a triumphant return to the track with a resounding victory in the 2012 Cycling Australia Madison National Championships at Melbourne's DISC Velodrome on Saturday night.

Two-time reigning madison world champions Leigh Howard and Cameron Meyer made a triumphant return to the track with a resounding victory in the 2012 Cycling Australia Madison National Championships at Melbourne's DISC Velodrome on Saturday night.

The pair last raced on a velodrome in the Netherlands in March this year where they claimed their second consecutive Madison world championship. However tonight Howard, 22, and Meyer, 23, showed no ill-effects of their extended lay off with a commanding performance throughout the 50-kilometre event.

The pair finished a lap clear of the field, while the South Australian pairing of Glenn O'Shea, 22, and Alexander Edmondson, 17, finished on 21 points and one lap in arrears of the world champions to take the silver medal. 2004 Olympic madison silver medallist Franco Marvulli and partner Marcello Barth claimed the bronze on 20 points.

"Since Leigh and I have donned the rainbow jersey, we haven't lost a Madison winning two world titles and two world cups," said Meyer, who claimed his third consecutive Australian Madison crown after pairing with Jack Bobridge to win in 2010 and O'Shea in 2009.

"It is always an honour to wear the stripes and we don't get to perform in front of the Australian crowd very often, so we try and put on the best performance we can," he added.

The pace was on right from the start of the 200-lap event, with the pairing of Sean Finning and George Tansley immediately showing their intentions by taking a lap within the first few minutes.

Howard and Meyer drove the pace through the majority of the race with the first major move coming shortly before the half-way point.

With Marvulli and Barth, O'Shea and Edmondson, plus reigning junior world champions Caleb Ewan and Jackson Law, they took a lap to join Finning and Tansley on the leader's board.

Meyer and Howard continued to be the agressors throughout the remainder of the race, targetting O'Shea's younger opponent in particular, with their decisive move coming with just over 70 laps remaining.

Despite desperate attempts by O'Shea and Ewan to match it with the world champions, the field was unable to respond to the pair who took the lap and control of the race, with the field left to fight it out for the minor medals.

Inside the final 50 laps, the junior world champion pairing of Ewan and Law were in a strong position to claim a medal, however a mechanical issue with Law's bike forced Ewan to ride solo for an extended period of time and as a result, the pair lost a lap and finished fourth.

For Howard and Meyer who are usually the marked riders, they turned the tables tonight with a calculated tactic towards their main rivals.

"There was a little battle going on between us O'Shea and Edmondson," said Meyer, adding "Unfortunately for Alex he was our target tonight, we kept laying into him a bit and eventually he broke and fortunately for us we took the lap we wanted," Meyer added.

Howard, who will join Meyer with Australia's GreenEDGE team in 2012, echoed his team mate sentiments, praising the seventeen-year-old Edmondson.

"We all know how well Glenn has been going at the world cups and the six-dayers so we knew there was no chance we were going to drop him tonight,' explained Howard who claimed his second Australian crown after pairing with O'Shea to win in 2008.

"We knew the only chance to get a gap was to attack when Edmondson was in the race, but having said that Alex rode an unbelievable race for someone that young, so hat's off to both of them.

"We haven't lost a madison in almost three years now, so I guess we are a good combination," Howard explained. "But of course, I am sure there is going to be a time where we make a mistake, where we are targetted and we don't win," he said.

O'Shea, is in his first full year back on the bike after two years racked by illness including bouts of chicken pox and glandular fever, was crowned Australian omnium champion less than twenty four hours earlier.  Last month he teamed with Edmondson to win gold at the second leg of the 2011/12 UCI World Cup Series in Astana.

After the race, Edmondson was unfazed by the attentions of the world champion pairing.

"It's bike racing and we are not there to make friends on the track and they were the better riders today, but I would like to thank my partner Glenn O'Shea, I couldn't ask for a better partner," said Edmondson.

In other events during the night's racing, O'Shea won the prestigious Melbourne Cup on Wheels handicap race riding off scratch, while Isabella King claimed the women's handicap.

In the Victorian keirin championships, Jaron Gardiner claimed the men's event and Thomas Clarke the junior men's 19 title. Both women's championships will head north of the border after Queensland's Emily Rosemond snatched the senior title and Queensland's Taylah Jennings overcame a 40m deficit inside the final lap to win the junior 19 event.