Cathy Freeman - Fostering the next generation of golden journeys 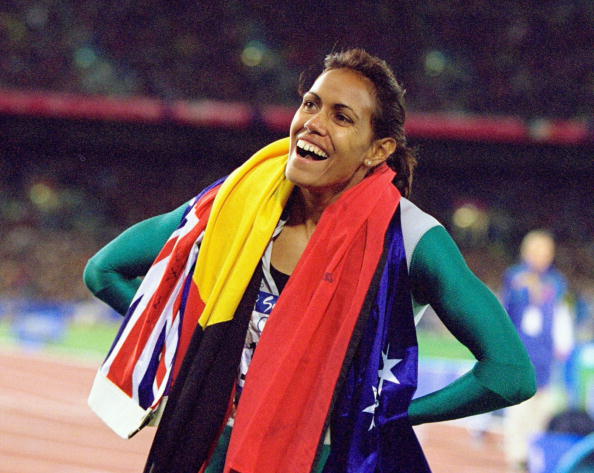 The name Cathy Freeman is synonymous with inspiration, triumph and glory. Born into a community where ambition was chronically short, Freeman’s aspirations to be the ‘best in the world’ broke the mould and inspired a nation.

She was an incredible athlete, but even more importantly, Freeman was a beacon of strength and pride for both the Indigenous and non-Indigenous communities of Australia, when calls for reconciliation were at an all-time high.

Wearing her iconic green and gold bodysuit, coupled with her Indigenous-inspired red, black and yellow sprinting shoes, the world held its breath and watched history unfold.

On September 25, 2000 at Sydney Olympic Park, a young Aboriginal woman from central and outback Queensland united a nation.

Paying tribute to both her country and her heritage, the then 27-year-old sprinted to gold at the Sydney 2000 Olympic Games, proudly carrying both the Australian and Aboriginal flags throughout her victory lap.

When Freeman called time on her illustrious sporting career in 2003, she had collected a gold and silver Olympic medal, four Commonwealth Games gold medals and multiple World Championship titles.

Freeman’s vision for CFF, is to see an Australia where Indigenous and non-Indigenous children have equal access to education and the same opportunities for success in life.

The foundation was started almost 12 years ago in Palm Island, a community very close to Freeman’s heart.

“Palm Island is very dear to both my mother and me,” the dual Young Australian and Australian of the Year said.

“I remember going there as a child and those memories still really stand out.

“It’s a rural, tropical place, but had its own feel, similar to when you go to any isolated outback town, the isolation brings about a particular way of living.

“It wasn’t helplessness or hopelessness, it just didn’t have that same sense of prosperity you would find in the city, where people have the confidence to go out and get what they want,” Freeman described.

“Having that burning ambition just didn’t exist on Palm Island, so I always knew I was different,” she said.

According to the Australian Bureau of Statistics, it is also the fourth most disadvantaged community in the country.

As a child, Freeman had a sign that read, ‘I am the world’s greatest athlete’ hanging on her wall.

“Whenever I would visit Palm Island or even my hometown in Mackay, it was always a bit unusual for ‘someone like me’ to have such great aspirations,” the now Melbournian said.

Even as a 10-year-old, Freeman knew that her dreams may not have seemed attainable to those that surrounded her, which is why she started CFF.

“I recognised that what I was dreaming of, was not something that most kids on Palm Island would have even thought they were capable of,” she said.

“My mum always said, ‘don’t ever forget where you come from and where you belong’, so it was a natural choice for me to start the foundation in Palm Island.”

But it wasn’t just her mum who inspired her to use her talents to make a difference in the world; it was also her older sister, Anne-Marie.

“There has to be a real, personal and sacred meaning to your actions and I was fortunate in that along with my ancestors, I had my big sister who gave me that meaning,” Freeman said.

Anne-Marie had severe cerebral palsy and passed away in 1990 but continues being Freeman’s biggest inspiration.

“I remember as a 13-year-old there was a stage where I’d just had enough of running and was more interested in being a normal teenager,” she said.

“But I was quickly reigned back in when I was reminded that I had this God-given gift, a wonderful opportunity unlike my big sister.

“Anne Marie helped me to understand that I had to be grateful for what I had, in order to honour her story. She breathed a sense of purpose into my life that was above me.

“Everything I did, was for her and for anyone else who didn’t have those same opportunities afforded to them in life.”

Freeman wants to instil the same sense of purpose, resilience and self-belief into the minds and hearts of today’s Indigenous youth.

When CFF began in 2007, statistics claimed that more than 90% of Year 7 students living on the island couldn’t read or write at the minimum national standard, truancy rates were as high as 55% and less than 10% of students graduated high school.

Since Freeman’s aspiration was first realised in 2007, CFF has played a central role in the lives of thousands of Indigenous kids across four communities, helping them to realise their own gold medal journey.

Through the delivery of five programs, CFF follows the journey of a child’s education from pre-prep through to Year 12, recognising, rewarding and encouraging positive educational pathways.

Being able to give back in the way of educational pathways is especially meaningful to the 46-year-old, as school is where her incredible journey began.

“I was so fortunate to have had so much support around me at school.

“I had my first running race in grade one and I was so shy that my teacher, Mrs Baldry, hunted me down out of the bathrooms and walked me to the start line,” she fondly recalled.

“The teachers were very nurturing and caring, they always went over and above, fundraising for me to go away and taking me to and from training. I was just really lucky to have received that support.

“Out of the kindness of their hearts, it was all about looking after this little girl, me, so she could reach her full potential.”

The aim of CFF is to provide that same support, setting indigenous children and youth up with all the tools they need to find success on whichever path they choose, and the statistics speak for themselves.

Since its inception, the foundation has seen some incredible outcomes, such as a 50% increase in Year 12 graduations between 2017 to 2018, across all four of CFF’s partner communities.

“There are many incredible stories of our kids who have exceeded their own expectations in spectacular style,” Freeman said.

But the most rewarding part for her, is seeing these kids realise their own potential through CFF’s various programs.

“When you see a child, who is beyond petrified of public speaking, present a five-minute talk in front of one of our corporate partners, it’s amazing. Those moments are just so special” she said.

“These kids would come down to Sydney, Melbourne or Canberra, from any one of our four remote communities.

“They would be so quiet and shy in the beginning, but by the end, these kids are standing up tall and proud and delivering their speech so confidently.

“They talk about their goals for the future with their heads held high and know the importance of taking up the opportunities they have, it’s just magnificent!”

This newfound sense of confidence and possibility not only enhances the lives of these kids, it has an inspirational flow-on effect, with students returning to their communities to share that drive and motivation with those around them.

Freeman’s emotional investment in the futures of these children is exceptionally high.

“You can see it, when the penny drops, and those kids realise, ‘I can do this,’ and it’s so special. They’re so happy and so proud and you can feel the pride emanating from everyone around them,” she said.

“These kids are just so precious and sometimes all it takes is a little bit of time and conversation to help them realise who they want to be and what they want to do.”

Freeman’s feats both on and off the track have also inspired the generations that followed her.

Fellow Indigenous Olympians Kyah Simon, Taliqua Clancy and Brad Hore all credit Freeman as an inspiration in both their sporting careers and in wanting to make the world a better place for Indigenous youth.

Freeman says inspiring others to follow in her footsteps is immensely humbling.

“I am moved, chuffed and overwhelmed all at once, knowing there are so many great role models wanting to make a difference is incredible.

“It’s so important to acknowledge and value Indigenous contributions to Australian society, particularly through Olympic sport, so all our young people can see an embodiment of what is possible and achievable in life.”

You can learn more about CFF and how to support their work at www.cathyfreemanfoundation.org.au