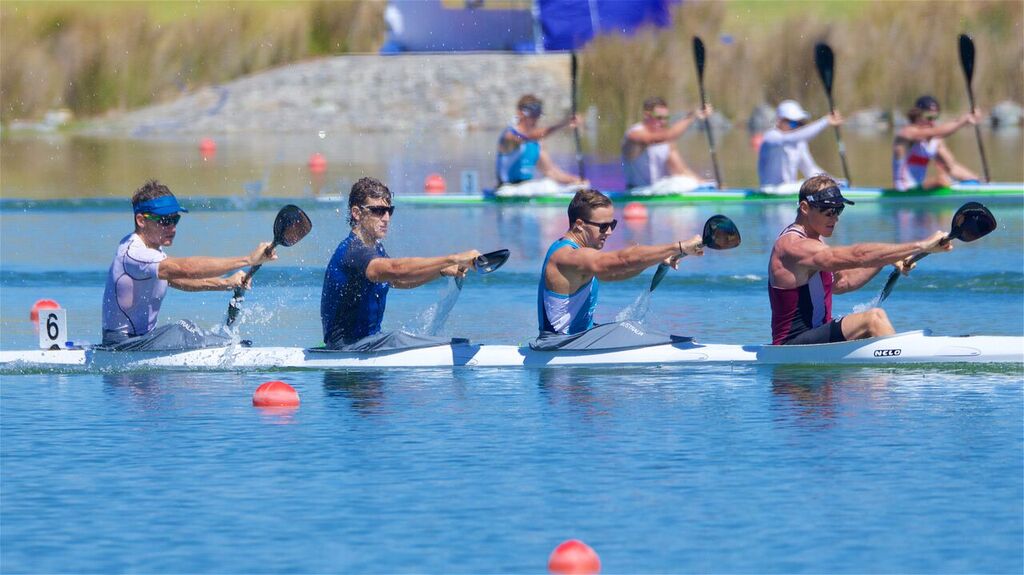 CANOE/KAYAK: Lachlan Tame is another step closer to making his Olympic debut after he teamed with Olympic gold medallists Ken Wallace, Murray Stewart and Jacob Clear to win the men’s K4 1000 final at the National Canoe Sprint Championships in Perth.

After the quartet won the first nomination race at the Oceania Championships last month the second win earns them the right to be nominated to the Australian Olympic Committee for selection on the Rio 2016 Team.

While the athletes still need to be ratified by the AOC and Australian Canoeing can change the boat combination up until the Olympics, this performance keeps their Olympic dream on track.

The quartet finished 1.43 seconds ahead of the outstanding young crew of Riley Fitzsimmons, Joel McKitterick, Daniel Bowker and Jordan Wood in a time of 2:54:02

Only Stewart and Clear remain from the K4 combination that won gold at the London Olympics, with David Smith injured and Tate Smith serving a ban for a positive drugs test.

But Stewart believes the new combination has what it takes.

“You don’t want to talk about relief, but I think for us here there probably was a bit of relief to get it done,” Stewart said.

“I’m really excited about what this boat can do. We’re a new crew, and that’s two good races now.

“There’s a little bit to go, but it’s going well. We’re developing a race plan, we haven’t quite nailed it yet, but we’re working on a formula. We can see where we want to be, we know what we want to do.”

Wallace, who won gold in the K1 500 in Beijing, is set to go to his third Olympics, and says the excitement is just as great this time round.

“To get that win, and possibly go to a third Olympics, is pretty special,” Wallace said.

“I don’t think it’s sunk in yet, I think it will sink in on Sunday afternoon after our last race. It doesn’t get any less exciting.”

Jake Clear is also set for this third Olympics, and said it was a relief to get today’s race done.

“I suppose there’s been a lot of tension in there for the last week or two, but it’s good to do that one and to be able to concentrate on the rest of our races knowing we’ve got that foot in the door,” he said.

“It’s a dream to get to one Olympics, but to get to three is another thing.”

Tame is set to go to his first Olympics, and revealed he had an attack of the nerves before Wednesday’s race.

“I went to the toilet five times and I spewed up just before the race, but I didn’t tell these guys that,” Tame said.

“I had to walk down to Kenny before the race and tell him to keep talking, don’t let my mind wander.

“I’m stoked, to be with three great paddlers, and to be part of a great massive team with all the young blokes.”

Tame and Wallace have also get their sights set on qualifying in the K2 1000 event, a race in which they have won silver medals at the past two World Championships.

And Stewart is hoping to qualify as Australia’s paddler in the K1 1000, which he also competed in at the London Olympics.

Another win for Brigden-Jones but Rio still no guarantee

2012 Olympian Jo Brigden-Jones has done everything she needs to do to qualify for the K1 200 in Rio but her Olympic nomination is still not certain.

Australia has only qualified three women for Rio, and with the K2 500 crew taking two of the positions, it may come down to a battle between Brigden-Jones as the best K1 200 paddler, and whoever wins the K1 500 position.

Such is Brigden-Jones dominance of Australian sprint canoeing at the moment she is also the front runner for the K1 500 berth, having won the first Olympic qualifying race in Adelaide.

And she and partner Naomi Flood are also hoping to qualify as the K2 500 crew, although they were beaten by Queensland’s Alyce Burnett and Alyssa Bull in the first Olympic trial.

“The job’s not done yet, I still have to keep focused,” Brigden-Jones said.

“Because we only have three spots for the women, there’s a battle on. I guess I’m three quarters of the way there, and if I win the 500 I’ll secure my spot.

“You want to know as soon as possible, but I just have to be patient for another couple of days to see how it will pan out.”

It was heartbreak for fellow 2012 Olympian, Alana Nicholls, who once again was edged out by Brigden-Jones in a blanket finish.

The final margin of 0.09 seconds was similar to the margin in Adelaide, which means the West Australian paddler has to now wait to find out if she can still make Rio.

If Brigden-Jones and Flood can win the K2 500, it will throw open several possibilities as to who the third team member might be.

And if Brigden-Jones can win the 500 final on Friday morning she’ll then be able to plan for Rio.

“I feel really good for the 500, I haven’t trained specifically for the 200 this year,”

“It’s nice to show that I am going quick, and I’m looking forward to putting that into my 500. It's really exciting and rewarding to see myself grow over the past four years.”

A final selection announcement for the Sprint Section is expected in mid March.