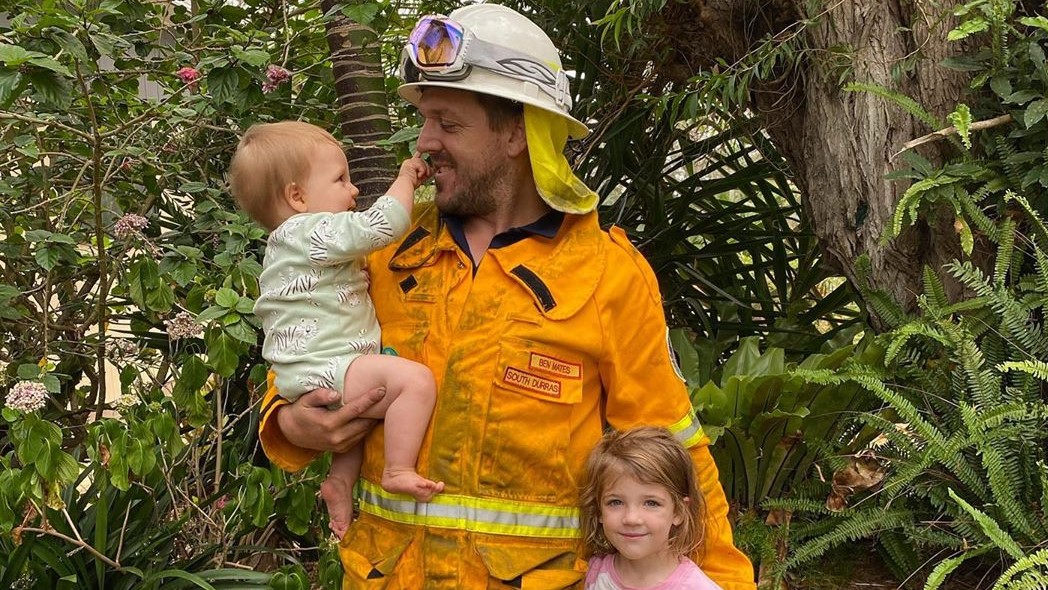 Amidst the despair of the fires ravaging the country, Australians have been inspired by the incredible courage, selflessness and generosity of communities coming together to help those affected.

Snowboarder Ben Mates is one of the Olympians who has been on the front line, battling fires on the New South Wales South Coast as an RFS volunteer firefighter.

After retiring from elite competition which included competing at the Torino 2006 and Vancouver 2010 Winter Olympics, Mates followed in the footsteps of his father, Bob, joining his local Rural Fire Service.

Night shifts are long and dirty. Saturday is not looking good, but we will be ready @nswrfs #currowanfire #ruralfireservice

The father of two is spending what should be his Christmas and New Year break, fighting fires for up to 15-hour shifts. Despite his heroic efforts, Mates simply sees keeping his community safe as just part of who he is.

“As a kid, I grew up having Santa come around on the fire trucks every Christmas and my dad has volunteered for the RFS for over 20-years,” Mates said.

“I always wanted to give back to my community, so when I retired from snowboarding, becoming a volunteer firefighter was something I thought I’d really enjoy and act as a way for me to do that.”

The recent fires have hit close to home for Mates, with his suburb one of the only unburnt areas remaining on the South Coast.

“South Durras is the last little green area that’s left, so we’re kind of lucky at the moment,” he said.

“But fires are so unpredictable and change with the weather, so we’re always on edge a little bit. You never really know.

“When I was at work before I started my leave, there were days where the weather would get a bit wild so I would finish early and either get the house ready or go out in the truck to put out the fires.”

Mates says that the experience of risking your life on the front line and battling through the heat is hard to explain, but it’s more than just fire that these voluntary heroes have to contend with.

“Being in the thick of it, is very daunting. There are a lot of things in the back of your head, it’s not just the fire that you need to look out for,” he explained.

“Generally, a lot of trees will come down, so you need to be very aware of your surroundings and also keep an eye out for your other brigade members as well.

“Fire can do some crazy things and you can get caught in some really dangerous situations that can shake you up a bit.

“Most of the members in our brigade are retired, I’m probably the youngest by about 20 years or so but they’ve had some scary encounters in their time.”

The toughest part for him emotionally is knowing that there will be loss, that’s out of their control.

“You never want to see someone lose their house or for people or animals to get hurt but you just can’t save everything,” he said.

“The natural heat of the fire and the smoke can catch you off guard and be really hard to handle. I don’t think people realise how intense the heat of a fire is, especially when you’re only a few metres away from it,” Mates said.

“The shifts are pretty taxing, especially the night shifts and it’s not just bush fires, it’s house and motor vehicle fires, also cutting down trees and moving logs. It’s a lot of manual labour which can get quite demanding.”

While he’s been fighting fires, Mates has also been recovering from Anterior Cruciate Ligament (ACL) surgery he had just over three months ago, but in true form, the 36-year-old has been playing it down.

“I had ACL surgery about 14 weeks ago after injuring myself snowboarding. It’s not 100% but it hasn’t given me too much trouble,” he said.

“I just have to be cautious of it, especially with things like getting in and out of the truck but I’m not in pain. It’s more so just weakness than anything.

Mates said that the reception and gratitude he has received from the public, has made it all worth it.

“I’ve been blown away by how grateful people have been towards us," he shared.

“Batemans Bay and the tourist zone on the South Coast was completely evacuated so as families were leaving the area and we were driving straight into the danger zone we would have people clap for us or give the thumbs up.

“It’s a really nice feeling, they know that you’re trying to keep them safe and they appreciate it.

“The whole community has come together to support the firefighters and the people who have been affected,” he continued.

“Everyone can provide something different when it comes to support and there is definitely a lot of support out there and as long as the resources are there, the RFS are there to look after you. You’re in safe hands.”

The entire Olympic family thanks Benny and fellow Olympian and RFS volunteer Janelle Shepherd for their courage and generosity in fighting the blazes across NSW.

You can find out how the AOC plans to support the rebuilding of communities HERE.

You can also read how other Aussie Olympians are contributing HERE.