Ryan Callinan: Riding the waves of grief, loss and triumph 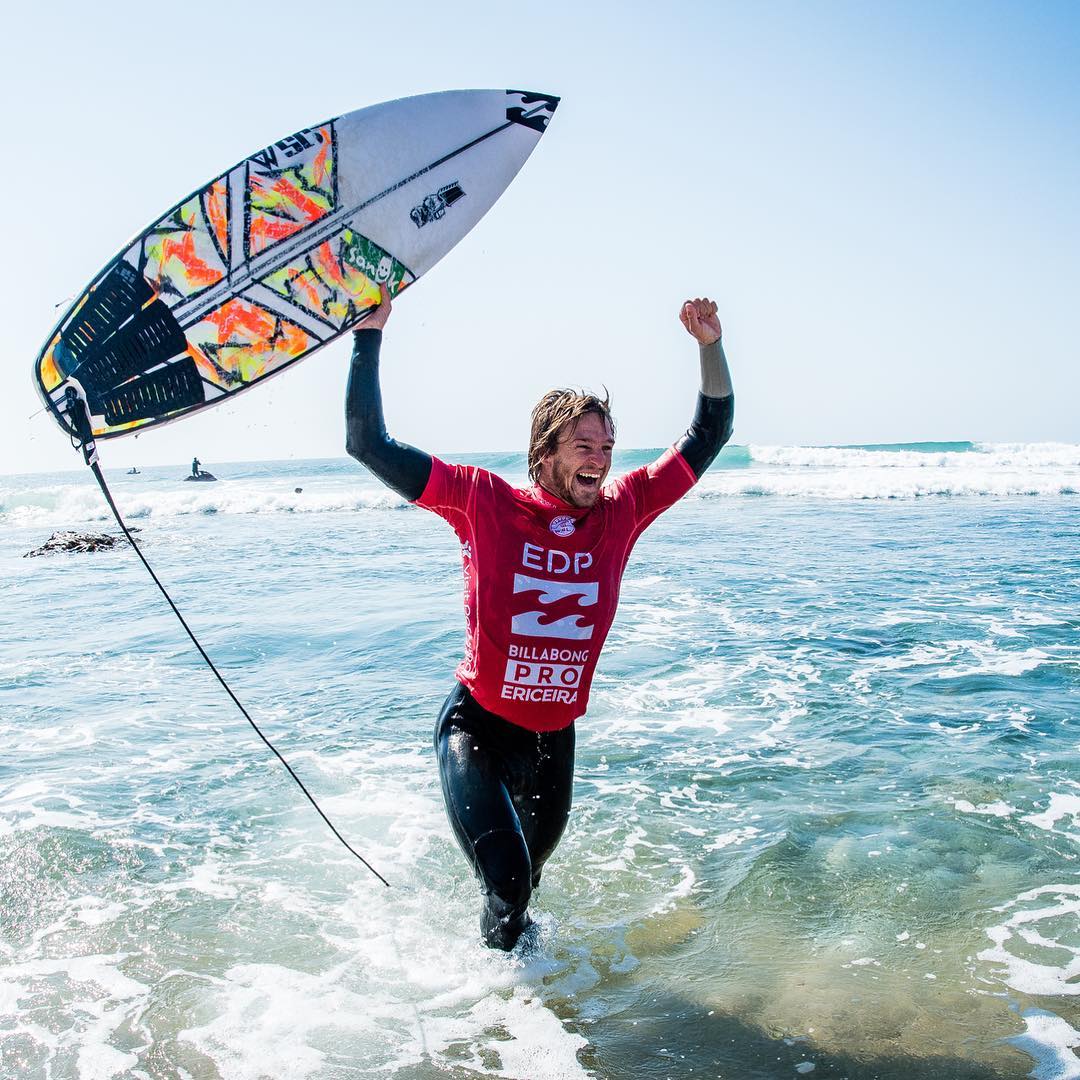 In 2016, Ryan Callinan became Newcastle’s first surfer in over a decade to qualify for the World Surf League (WSL) Championship Tour, but his battles out of the surf were his most challenging - losing both his father and mother in less than 18 months.

The Merewether local made his WSL debut after a string of impressive performances throughout the World Qualifying Series (WQS). What should have been a joyous time was marred by tragedy when at the beginning of that year, Callinan’s father Garry lost his year-long battle with leukemia.

Garry, or ‘Gaz’ as he was affectionately known, was a life member and sponsor of the Merewether Surfboard Club. A keen surfer who spent his time developing up and coming talent – like Ryan.

Described as a generous and positive man, his service to the surfing community still lives on.

Garry passed away three-days out from Ryan’s Championship Tour debut and as a tribute, Ryan chose to wear the number 57, the year his dad was born.

Ryan still contested the tour but looking back, realizes it was less about competing and more about serving as a distraction from the devastation of losing his best mate.

“I’d had a really good run leading into the 2016 WSL Tour, but once I was there, I just kept having bad result after bad result,” the 27-year-old said.

It wasn’t long before he realized there was nothing the WSL could give him that would take away the pain of losing his father – and his results were only a mirror of this.

“I felt like I was running away from dealing with the passing of my dad, thinking I could keep my personal and professional life separate. Eventually, everything just came crashing down.”

After a loss to Kelly Slater at the Pipeline Masters 10 months after Garry’s death, Ryan was knocked out of the Championship Tour and his 2016 season ended.

“I fell off tour, which probably wasn’t a bad thing at the time,” Ryan said.

“I realised that I needed time away to deal with the loss of my dad, to settle and just recalibrate.”

Ryan shared that his sports psychologist brought to his attention that in the 12 months since his father had died, he hadn’t mentioned his passing once and that’s when he knew it was time to stop running.

Once he had accepted his grief and started working through it, it wasn’t long before Ryan was back on board, making his mum Janice and twin sisters, Maddi and Billie, proud.

He jumped back into the minor leagues of the WQS with the goal of making it back on the main tour, but he was dealt a second cruel blow.

“I started off really strong and was performing the way I wanted to and then a few months into that year, my mum passed away unexpectedly. I felt like I’d been hit by a truck.”

On Mother’s Day in 2017, Ryan’s mum passed away suddenly - less than a year and a half from the loss of his father.

He and his sisters had spent the Sunday morning of Mother’s Day with Janice. Ryan went out for a surf and was planning on meeting the family for lunch at a cousin’s house.

He received a frantic phone call from his sister Billie; “Can you come home? Mum has collapsed!”

Ryan rushed home to an ambulance with paramedics performing CPR on his mum. He tried to help, but there was nothing he could do. Janice passed away before paramedics were able to get her to the hospital.

“It was like everything just hit me at once, my dad passing away, my mum passing away… There was nowhere to run and nowhere to hide. I just had to deal with it head-on,” he said.

The then 24-year-old’s world had again been turned upside down in the most heartbreaking way.

Understandably his surfing also suffered, and he considered calling it quits not knowing if he’d ever reach the heights he had tasted before he lost his mum and dad.

“The rest of that year, my surfing wasn’t very good. I couldn’t focus at all and I considered giving it up,” he said.

“In the long run, losing mum and dad made me consider what was most important to me.

“I still wanted to compete, but that wasn’t my main goal anymore. I let it all go in a way… I just went back to the basics – enjoying surfing as something that I just loved doing.

His change in perspective also led to an inadvertent change in his performance.

“I travelled and just enjoyed surfing with no pressure which translated to me being able to surf freely and at my best.

“Those few months in Europe were really special and I just felt like I deserved to be on that tour. The last time mentally, tactically and even energetically, I wasn’t at my best, it wasn’t the right time – I was avoiding dealing with the loss of my father, but then I felt like everything was coming together.”

During those few months, Ryan was back on the WQS, he won a major qualifying event in Japan and tearfully dedicated the win to his parents. He then went on to beat World Champion Gabriel Medina in Portugal and was given a wildcard into the France Pro where he defeated former World Champion Adriano de Souza, World No.1 Filipe Toledo along with fellow Aussie Owen Wright to make the finals.

“The waves just started coming to me for the first time in years. I got my first win, then another and then I received a wildcard into the France Pro where I came second, which is the highest placing I’ve ever achieved.”

Losing one parent would knock even the strongest of people, let alone losing two in less than as many years, but Ryan says the resilience he has found was somewhat of a parting gift from his parents.

“The upbringing my parents gave us, in a way, prepared me for something like this,” he said.

“They would never have foreseen it happening but the amount of love and support they showed me and the attitude they had to life in general, really left an imprint on me.

“They were quite spiritual and taught me that bad things happen in life and you can’t control that, all you can control is your attitude in the face of it.

“The world will keep spinning, bills will keep coming, everyone still has to go to work and make a living – as devastated as you may be, those things don’t stop.

“In a way, losing my parents prepared me for anything life could possibly throw at me, because if anything else happens, I know it will never be as bad as that.

“It took me some time but I realised I had to face my grief and learn to sit with uncomfortable or hard feelings. It’s painful at the time, but it definitely makes you more resilient.

“My advice for anyone who has gone through something similar is not to run from it or try and block it out, but sit with it, talk to people about it and be vulnerable with people who are there to listen.”

Many surfers consider their craft a spiritual one. Their connection with the ocean and the environment around them plays a big part in their overall performance, but for Callinan the spiritual connection runs deeper than water.

“I knew the best thing for me, and the thing that my parents would have wanted me to do, was to keep surfing,” Ryan explained.

“I’ll have moments when I’m surfing, and I can see my dad out there and hear the conversations he’d be having. He was very jolly and very loud in the surf, always happy and talkative.

“I feel like he will always be there in a way, because when I surf at home, people will say things to me like 'Imagine if Gaz was here to see that', which makes me feel pretty special and close to him.

“I also feel it when I see two birds, a rainbow or if something amazing happens while I’m competing.

“People might say it’s coincidence, but it’s my way of feeling something knowing dad and mum are always there with me.”

Ryan’s goal is to continue to make his parents and family proud and having surfing added to the Olympic Programme for Tokyo 2020, is just another outlet for him to do that, but in a very special way.

“If my story can help other people, that’s great, but if it only helps me then that’s fine too,” he said.

As for what it would mean to represent Australia as one of the country’s first Olympic surfers, he says nothing beats having the backing of an entire nation.

“It would be an incredible experience just to feel a nation behind you, pushing you,” he said.

“I think Australia really gets behind it’s surfers within the sport, but to have a whole nation gunning for you, regardless of whether they’re surfing fans or not is going to be so unique and special and I just hope I get to be a part of it.”

Whether Ryan makes Tokyo or not, he is confident of the support of his country, community, and family - both here and in spirit.

“Hopefully the results keep coming and I make it to Tokyo, but if they don’t, then that’s alright too because surfing is something that I’ll always love – whether I am competing or not.