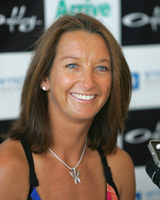 Beachley made her debut on the Association of Surfing Professionals (ASP) Women’s World Tour as a 16-year-old and climbed the rankings with determination and focus that would see her become one of Australia’s greatest athletes and the most successful female surfer of all time.

Beachley made her debut on the Association of Surfing Professionals (ASP) Women’s World Tour as a 16-year-old and climbed the rankings with determination and focus that would see her become one of Australia’s greatest athletes and the most successful female surfer of all time.

Her first World Championship title came in 1998, and she would go on to win the next five years in a row, becoming the surfer with the greatest number of consecutive world titles, male or female.

Beachley’s domination in women’s surfing was not only a success for her personal sporting career, but it served to break down significant barriers in the profile of the sport, and inspire female athletes both in Australia and internationally.

There are now four appointed ALOs accompanying the Australian Olympic Team to London in 2012, with Beachley joining sporting legends Andrew Gaze, John Eales and Steve Waugh. They aim to help the athletes maintain focus and maximise performance with the assistance of the head coaches and team managers.

“It’s an absolute honour and a privilege to be able to fulfil this role,” Beachley said.
“It was always a dream of mine to go to an Olympic Games and an Olympic gold medal is the only thing missing from my trophy cabinet.”

As an ALO, Beachley will provide support and guidance for individual athletes and teams by sharing her experiences from an illustrious sporting career.

“I am looking forward to being able to share my wealth of experience with the Olympians who have the dream of succeeding in their sport,” she said.

”One of my strengths throughout my career was my mental aptitude, an essential tool for anyone wanting to achieve a life-long goal.”

“Coming from an individual sport, I will be able to provide an alternative approach to competition - share some of my knowledge on how to approach pressure situations and thrive on them.”

“In surfing you are up against Mother Nature and that comes with an abundance of variables. To be the best you need to be able to adapt, change direction and plan ahead.”

The Australian Olympic Committee (AOC) is thrilled that Beachley has accepted the appointment and is sure she will make a positive and inspiring addition to the Team.

“I know Layne and she has always greatly impressed me as a person,” AOC President John Coates said.

“Her commitment to being the best at her sport is second to none. She will be a very positive influence on our athletes as they strive to succeed in London.”