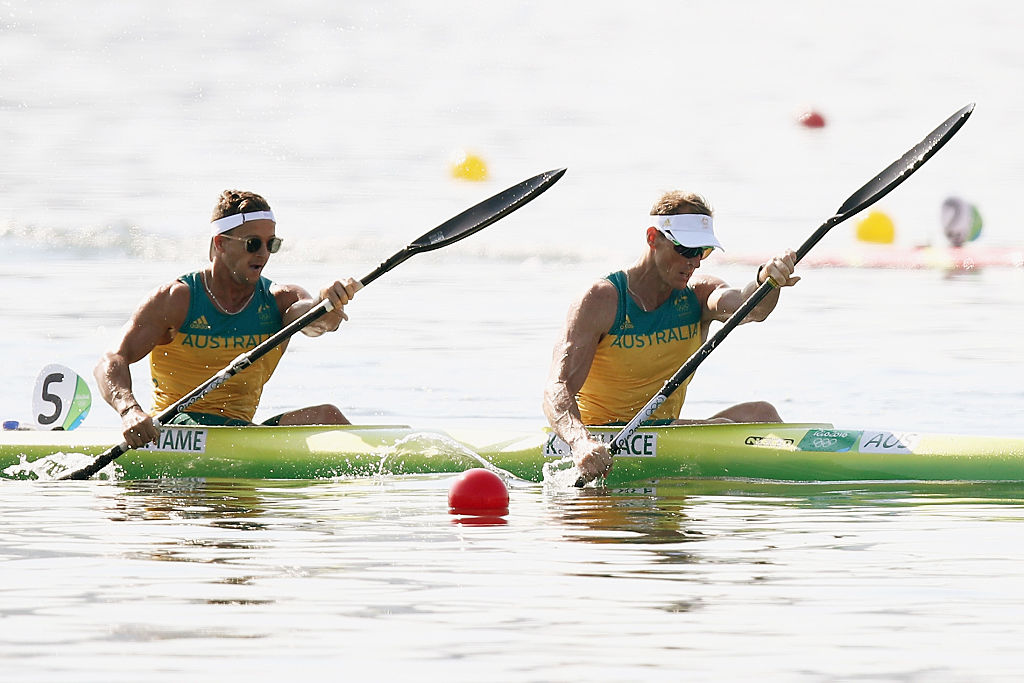 Ken Wallace and Lachlan Tame have claimed Australia’s first sprint canoe medal of the 2016 Rio Olympic Games. The duo, racing in the men’s K2 1000m won bronze in a time of 3mins 12secs, while Germany and Serbia took gold and silver respectively.

Wallace and Tame, coached by Jimmy Owens, powered out of the start to sit behind leaders Germany at the halfway mark of the race. With Germany continuing to extend their lead, it was a battle for silver and bronze, with the Serbians holding off Australia, leaving Wallace and Tame to snap up bronze ahead of Portugal.

“To put on the green and gold and come tearing down representing the rest of our country, we’ve already had a win there and then to get up onto the podium, with one of my best mates, I couldn’t ask for anything more,” said three-time Olympian Wallace.

First time Olympian Tame couldn’t believe that he had claimed an Olympic medal at his first Games.

“I’m speechless, you couldn’t expect anything going into that race, I was a little surprised at the end, so I’m stoked. I can’t thank my family and friends at home enough for all their support,” said Tame.

Speaking about the stiff competition in the race, Wallace admitted that Germany was always going to be the favourites for the win.

“There were seven other crews in there but we knew the Germans were going to be the ones to beat,” said Wallace.

“We held next to them at the 500 metres and we knew they were going to push at the third 250 metres, but just to be next to them, going head-to-head with them was fantastic, they simply raced better than us today. In a tough race we are just stoked to be on that podium.”

Tame said that the Australians were focusing on their own race.

“We wanted to get out hard and we knew we would be in the race for medals, at 300 metres to go you can’t really focus on anything but your own race, but we could sense the pink boat of the Germans, but that was about it,” said Tame.

Wallace had earlier traced the outline of his two children’s hands onto his paddle. With the outlines of three-year-old Nixon and nine-month-old Bodhi clearly visible on his paddle, Wallace took to the water with Olympic debutant, Tame in a bid to claim his first Olympic medal since winning bronze and gold Beijing.

“I was hoping the kids’ hands on my paddle would give me a helping hand and I’m so happy that I’m able to share this journey with them,” admitted Wallace post-race.

Wallace has the K4 heats and semis to race tomorrow for Australia, but he was already being asked if he would be racing in Tokyo at the 2020 Olympic.

“I’d like to hope so,” Wallace said. “For me personally, since having the children I have had the most successful three years of my career, so to call it quits now, after these Games, I’d feel like I’d be cheating myself.”

“But what we do is so selfish, it’s so much time away with family and friends, but at the end of the day I want to be in Tokyo but also watch my kids grow up and have fun with all my family.”

Daniel Bowker and Jordan Wood competed in the B-Final of the men’s K2 200m against Italy, South Korea, Brazil and Kazakhstan. The duo finished third overall, with Wood next racing tomorrow (August 19) in the men’s K4 1000m with Ken Wallace, Riley Fitzsimmons and London 2012 gold medallist in the event, Jacob Clear.

Steve Bird will also compete in the men’s K1 200 metres, while Martin Marinov and Ferenc Szekszardi will race in the men’s C2 1000m heats.